This grid was essentially David's idea.  The two previous grids I'd come up with did not have the 11-letter entries at 3- and 25-Down, and we were both having problems finding acceptable fill for a Monday-level puzzle.  My original construction also had 23 three-letter words instead of David's 16, and only 11 five-letter entries as opposed to David's 24.  His was a much better balance of four- and five-letter words, at 24 and 24.

So when he sent me his idea for the new construction, with the O-shape of black squares in the middle and the two long Down entries, it resolved most of the inherent fill difficulties.  The title was also David's—best I could come up with was "Pinching Pennies," which doesn't actually make much sense!  I've found that titles can be a bit problematic when one of the theme entries is a revealer.

My strong suit has never been 15x15s, so David's help was invaluable in this one, my debut puzzle for The Puzzle Society! 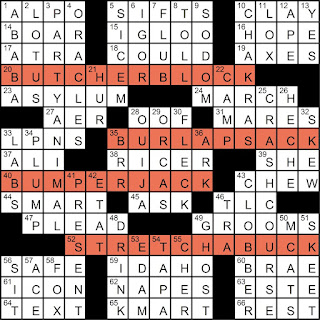