The title was David's terrific idea.  This had OMAN in it originally and three of the African countries, so I don't know why I didn't think of making the tight set myself.  Also, the TOGO one was originally BUY SOME FOOD TO GO [Get a take-out meal (from West Africa?)].  It was my seed entry, but it obviously isn't central, so this one had to change.  And for some strange reason I can't remember, my title was "Feeling Hungary?" when the theme words were hidden, not puns.  Thank goodness for such a gifted editor.  David has the near magical ability to turn scattershot themes into good puzzles. 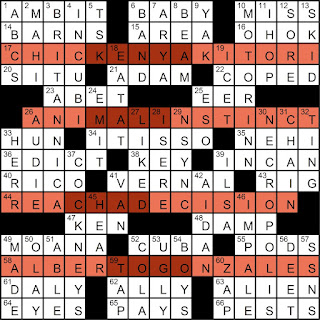