English is such a weird language!  I noticed one day that the letters -our are sort of like -ough—when placed at the ends of words, they can take on a variety of sounds.  I noticed FOUR OF A KIND when searching my word list for -OUR entries, and I was off and running from there.  I considered using TOUR DE FORCE for 17-Across, but having three four-letter -OUR words (TOUR, SOUR, and FOUR itself) paired with one seven-letter -OUR word (GLAMOUR) seemed inelegant.

I got lucky with this grid pattern.  Usually higher word-count grids have smooth short fill but little to no interesting long fill.  In contrast, lower word-count grids typically have lots of interesting long fill but at least a few eyebrow-raising short entries.  After about an hour of designing and test-filling possible grids, I stumbled across a 78-worder with more longish nonthematic slots than usual.  This pattern gave me lots of flexibility with the short fill while still allowing me to seed in several more interesting longer entries—not quite the best of both worlds, but closer than usual to what I'd ideally want. 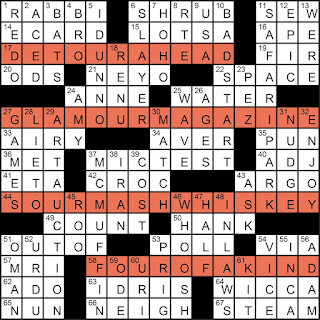