I've never found stacks of 15-letter entries satisfying to work with, so I thought I'd tweak the form to get some underappreciated 14-letter entries in on the cruciverbal fun.  The first phrase in the grid was YOU ARE NOT ALONE, which is both a) a statement many people need to hear, and b) a subtle reference to Doctor Who (series 3).  I was pleased with the entry directly underneath that as well.  Of course seats are limited.  Everything is, ultimately, limited!  Ah, marketing.

That stack in the middle allowed several long entries to shoot vertically through it, 4- and 10-Down being my favorites among them.  I tried to throw in some fun with those tight SW/NE corners; hope you weren't seeing double in the bottom left!

Fun fact:  16-A has never appeared as a New York Times crossword answer in any form!  We’ll resolve that little oversight sooner rather than later . . . right? 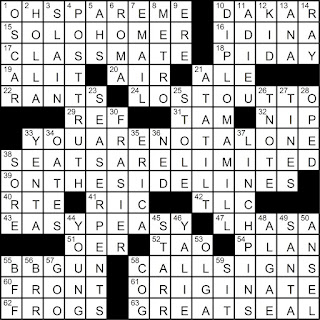