This puzzle began life five years ago as a completely different puzzle.  In that one, the revealer was SOUNDS FISHY, and the theme entries were all songs whose last word could precede FISH (HEART OF GOLD, TEARS OF A CLOWN, HONKY CAT, and I AM A ROCK).  Editors I tried to sell it to felt the revealer was a little off, so I shelved it but took the idea and eventually found another theme set it would work with that had a suitably strong revealer.

In my original version of this grid, I had RING OF FIRE, but David wasn't keen on the term firefight, so it got replaced with CHERRY PIE.  (We both would much rather have had AMERICAN PIE, but it was too long.)  Also, I'm embarrassed to say I submitted it with the unthematic ROCKY TOP where ROCKETTE is now.  Not only is ROCKY TOP another song in a puzzle already filled with thematic songs, it's also the de facto FIGHT SONG for the University of Tennessee.  I'm glad David's keen eye spotted that one.

This is my debut for the Puzzle Society, and I'm happy to be here. 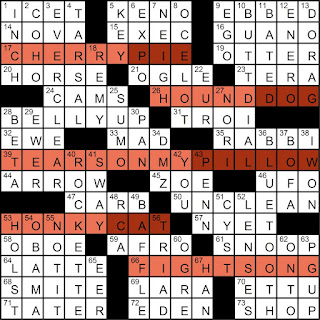