29-Across was the seed entry for the center stack, and I built that middle section probably over a year ago.  The grid was flexible enough that I looked to make the top and bottom as open as possible, so after a bunch of trial and error I was happy to get the pair of 15s and 10s to work in those areas.  I like the conflicting nature of VOLSTEAD ACT brushing up against IRISH ALE—Andrew Volstead is largely forgotten today outside his hometown of Granite Falls, Minnesota, but Prohibition has always been a fascinating chapter in American history to me, so I'm thrilled to debut the Prohibition enforcement act that bore Volstead's name in a crossword.

If challenging themelesses are up your alley, I've just released STRETCH, a "crossword EP" featuring eight oversized themelesses in rectangular grids.  For more info and to purchase, click here. 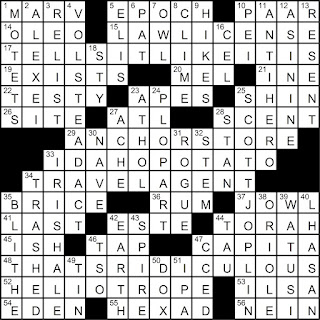