If you're familiar with the word rebus, you may know that its dictionary definition is a puzzle device that uses pictures to represent words or letters.  But in the world of crosswords, the term is used to describe a puzzle with squares that contain more than one letter.  That's what we have today, and to add another layer of silliness to it, the squares that contain these letters are all black.  So, you can't write the letters in, which is just as well, because it's a pain in the neck to write a bunch of letters in those little squares, and if you're doing it on your screen, it may be even harder or impossible.  Anyway, the letters represented by the black squares are combined with the letters to the right and left to make sense of the clue.  In this puzzle the word that goes in those black squares is (not by accident) something that goes with black, which is all revealed near the bottom of the puzzle by the adjacent entries BLACK and LABS.  Bow-wow.

This is a departure from my usual puzzle-making technique, which is to stick to fairly basic themes and confine the trickery to an occasional pun or deceptive clue or two. 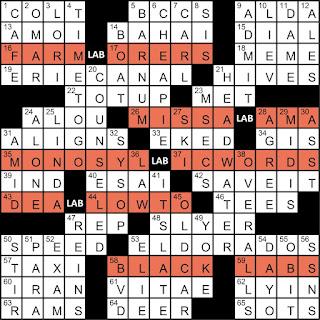