"Urban Areas," by Michael Down

This puzzle is my third-ever puzzle to be published, so I am very grateful to David for accepting it!  This one was a lot of fun to make.  Once I thought of the concept, I began to make a list of well-known cities with short-enough names to make the theme work and saw what phrases I could make around them.  It was important to me that the cities were dead in the middle of the themers, that they were well-known, and that the themers were themselves something interesting.  I am a Brit living in Canada, but the crossworld is an American-centric subculture . . . so at some point during the construction, it occurred to me that first of all, I needed to make the revealer CITY CENTER as opposed to CITY CENTRE and second, downtown is the preferred way of referring to the middle of a city in the States.  I was relieved to learn, after checking, that CITY CENTRE is still a phrase people know and that the theme could work!

The fill I'm fairly happy with—I hope there's nothing that made you groan.  The grid was a challenge to make smooth with that nine-letter themer in the center (/centre!) and the two twelves.  It made a lot of three-letter words inevitable.  Overall I'm happy with it, and I hope you enjoyed solving it! 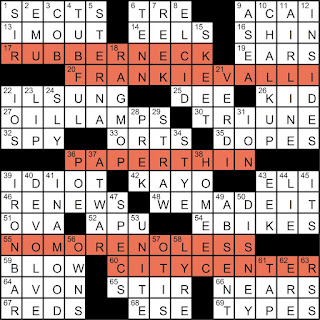 Email ThisBlogThis!Share to TwitterShare to FacebookShare to Pinterest
Labels: Michael Down, Tuesday