I don't have any recollection of how I got the idea for this puzzle; I do recall that it came after a year of no ideas, so I was very pleased to have something usable.  Once I had the idea, I used some UNIX tools, such as awk and grep, to search a large word list for candidates.  The grid was not easy to fill, but I wasn't going to let my first decent idea in a year slip away unused, so I persisted.  After receiving the submission, David suggested some changes to the grid.  I clued the revised grid, and voilà—I had a publication.

I saw in a blog that some puzzle composer described working with David as "awesome."  On the one hand, the author used what I consider a badly overused cliché to describe working with David.  On the other hand,  I want to take this opportunity to echo that sentiment, in spades. 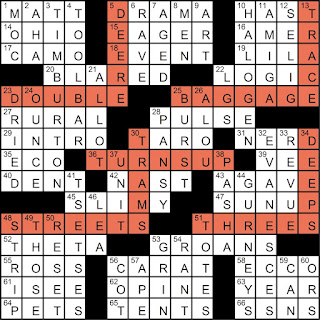