It's fun to play around with the conventions of crossword construction, and this puzzle's gimmick derives from a frequently seen convention:  the addition of a preposition within a clue to define it accurately.  One example is the clue [Ascend, with "off"] for the answer TAKE.  It occurred to me that an interesting twist on this procedure would be to take the "with" literally, creating answers that needed the letters in the preposition to complete the answer.

As I was finishing the puzzle, I got the odd feeling that someone might have done something similar before.  Searching my imperfect memory, I recalled a puzzle (perhaps by the late, great Henry Hook) that I believe used a very common clue addition—with "the."  Every answer needed the added letters THE to make sense, although I think the answers in that puzzle simply suggested that THE was missing; it did not create complete words in the puzzle with "the"—for example, THEIR would simply become IR in the answer.  I am pleased that I was able to find several reasonable, stand-alone phrases that allowed the addition of a short preposition to create a humorous new phrase, with each answer using a different preposition.

[Ed.:  The earlier puzzle Jeffrey refers to was indeed by Henry Hook and appeared in The New York Times on April 7, 2011; it can be seen here on XWord Info.] 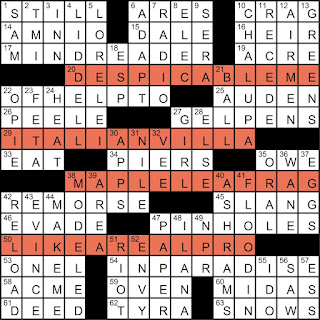