When you become an established constructor, friends and acquaintances begin asking if you'll work on a crossword puzzle with them.  In my case, one of those friends is Sid Kolpas, an award-winning and well-published math professor.  Sid and I have since co-constructed two crosswords appearing in Math Horizons and its sister publication Convergence:  "Mathematicians from A to Z" and "Mathematical Potpourri."

This got me thinking about whether I could construct a general-interest crossword with a mathematical theme.  And that led directly to today's puzzle.

There were a couple of stumbling blocks along the way.  I had to find a better way to hide three and five than IN THREE and FIVE-O.  Then, with David's help, we had to make everything fit into a 15x15 grid.  That meant replacing LIONESS, PIONEER, ARTWORK, and SLEIGHT OF HAND along the way.

If you enjoyed today's puzzle (and I hope you did), why not follow the links to the others above? 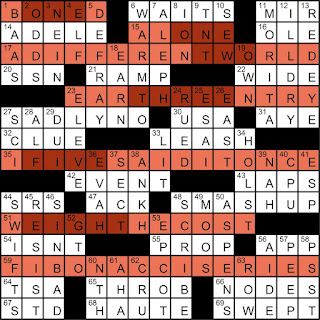