Like the other two puzzles I've published here, this one has had the benefit of David Steinberg's meticulous attention.  The base phrase for BABOON COMPANION (which I replaced with STANDING ABALONE) struck him as archaic; the one for COW PILATES (which he replaced with MUD PILATES) struck him as "a little gross."

I have a theory, which he has not denied, that "David Steinberg" is in fact not an individual person but a committee:  one edits these daily puzzles, a second makes remarkable puzzles for The New York Times, a third attends Stanford, a fourth poses for the pictures, and a fifth handled the blogging but quit or was laid off—a pity, for he or she was always perceptive and entertaining, whereas now we're at the mercy of constructors and their theories. 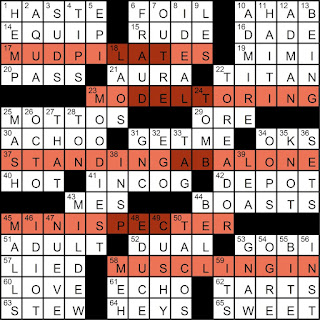