"Change of Venue," by John Guzzetta

I think this "playing surfaces-to-verbs" theme was one of the first I ever came up with, back in 2011 or 2012.  I found it sliding around in the bottom of a filing cabinet and decided it deserved a second look.  David wisely DQed a fifth themer that used pitch, since it's more of a Britishism for a soccer field.  These were the four that remained.

Looking again at the fill, I may have gotten a little too cutesy with the two-word phrases WHAT IF, KIND OF, LESS SO, and SING OF, but it's hard to say.  Maybe two out of four would have been better? 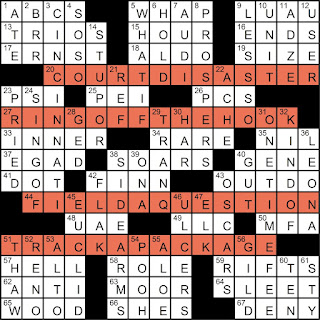