This theme is a good example of how a crossword maker's mind is always looking for common elements to form possible themes.  One day, upon hearing the phrase streaming movies, it occurred to me that stream appears at the ends of several compound words, the first parts of which can be found in movie titles.  A bit of Googling provided some well-known titles, and a new puzzle was born.

I always try to include every letter of the alphabet in my grids, if it's possible to do so without resorting to obscurities.  This grid just misses the mark (no Q), but I'm happy with some of the fun nonthematic entries.  Have you ever seen JAY LENO and THE FONZ together anywhere else? 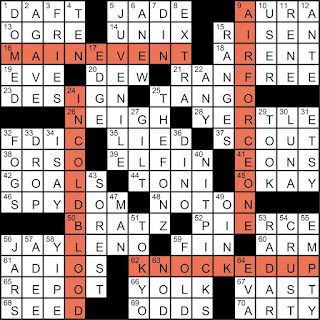 Such a specific theme today—there aren't many words that combine with stream, let alone ones in the titles of famous movies!  I also wholeheartedly endorse Patrick's philosophy about using every letter of the grid.  Rare letters (Q, Z, X, J, and even K) in particular are nice, since the entries that use them tend not to show up as much.  Using every letter of the alphabet forces the constructor to use at least one of each rare letter, which can in turn make the fill feel fresher from a solving perspective.  That said, if rare letters are jammed into places where they don't fit well, the fill can feel frustratingly obscure.  Overall, I think Patrick struck the perfect balance between unusual letters and smoothness.
Posted by David Steinberg at 12:01 AM