"Make a Stink," by Jeffrey Wechsler

To some individuals, the theme of this puzzle might seem a bit off-putting—or, to be even more blunt, rather malodorous.  As a constructor who enjoys devising themes involving the addition of letters to existing words, the letters PU offered a way to use a two-letter insert leading to an unusual, and hopefully humorous, twist within the revealer.  Of course, there is a decidedly mixed editorial tolerance for such themes, and I knew this one was going to trigger the apocryphal "breakfast test" for crosswords—the limitation of what falls within the boundaries of acceptable taste (or, in this case, smell).  Indeed, as I feared, this puzzle was deemed too offensive for another not-to-be-named crossword outlet.  Therefore, it is with great pleasure and respect that I praise David Steinberg for his open-mindedness for accepting this puzzle without holding his nose.  David saw the theme for what I think it is:  not at all offensive but, rather, funny—in effect, an exercise in crossword sensory slapstick. 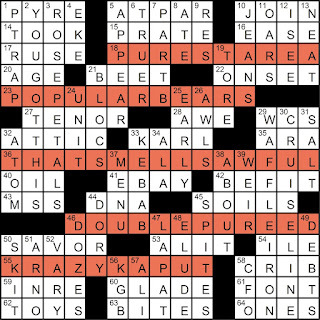