I had a fondness for Charles Bronson tough-guy movies during the 60s and 70s.  Not so much the Death Wish franchise, which grew more tedious with each subsequent iteration, but certainly The Great Escape, The Dirty Dozen, The Magnificent Seven, and The Mechanic.  MR MAJESTYK is a lesser-known film of his, portraying a former U.S. Army Ranger, now watermelon farmer pitted against the mob—and such a fun name for the bottom row of a crossword.  When it cropped up as a possible fill during construction, I couldn't resist. 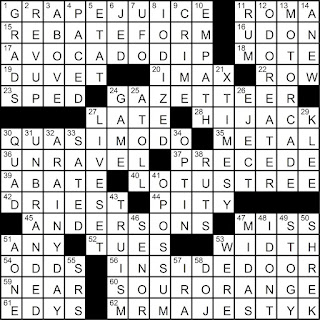 Although I wasn't familiar with MR MAJESTYK, the flashiness of the entry jumped out at me!  Definitely not the kind of thing you expect to see in the bottom row of your crossword puzzle.  I'm also a big fan of GRAPE JUICE, AVOCADO DIP, QUASIMODO, LOTUS TREE, and GAZETTEER (as opposed to the crossword standby ATLAS).  Seeing ANDERSONS in the grid reminded me of Pea Soup Andersen's.  My parents and I used to drive back and forth on the I-5 between Southern California and Northern California a lot, and we'd often stop in Santa Nella, where one branch of Andersen's is located.  Although we ultimately decided the restaurant was a bit of a tourist trap, I always get a laugh when I think of Andersen's.  I love how crossword entries can conjure up random memories!
Posted by David Steinberg at 12:01 AM