"Take It Down a Notch," by Mark McClain

The inspiration for this theme was the book Three Men in a Boat.  It's a humorous novel/travelogue (published in 1889) about a two-week rowboat trip on the River Thames from Kingston upon Thames (near London) to Oxford and back.  This was of great interest to me because a few years ago my partner, Diana, and I undertook a 125-mile, two-week backpacking trip on the Thames Path from the source of the river to Windsor (where the queen lives, just outside London).  We covered quite a bit of the same territory and even saw a few of the same type of boat (three-person rowboat) that was used in Jerome's book (one person does the steering, the other two do the rowing).  I heartily recommend this book to anyone who's interested in English culture or boating, but I strongly discourage eating off the floor anywhere that a four-second rule is in force. 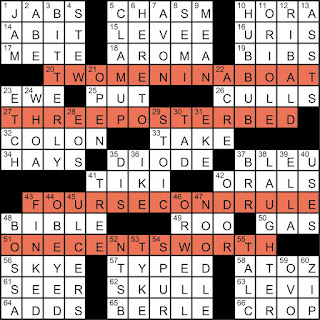