What's refreshing about this theme, to me, is that it's not an instance of a common well-known theme type.  Note also that in each equivalent pair, the same letter never appears in the same position in both words (e.g., if one word has an A as the first letter, the first letter in the other word is either a B or a C), which I think is an elegant restriction.

I wrote a couple of lines of Python code to generate a list of candidates for theme entries, which I then went over manually.  Other pairs of answers with the paired clues I would have used included PAID OFF [Panned out]/SCHEMED [Planned out] and PISTOL [Word with "drawn"]/SHRUNK [Withdrawn].  I couldn't think of anything for ABASHED and CAB RIDE.

The unusual lengths and layout of theme answers made it a challenging grid to fill, with little opportunity for sparkly bonus fill.  But USAIN BOLT is nice to have, as is the little Disney mini-theme.

I hope solvers had a positive experience with this.  Let me know in the comments! 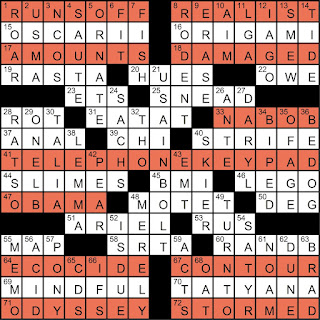