"Free for All XXVII," by Evan Kalish

You might imagine the impetus ("seed entry") for this puzzle:  MSNBC HOST, a wonderful car accident of consonants.  I liked being able to go all in on the blue state theatrics with CHAI LATTE and CARBON TAX—crossing McCAFE, of course.  These entries effectively fixed the layout of the grid, as well as entries out through TOE TAG and TEXAS TEA.  Working east I couldn't help but complete the string SOT- with SO, THAT'S IT?—a phrase that's almost impossible not to speak in your mind with dramatic flair . . . and possibly arm gesticulations.  I love seeing phrases like that in crosswords (another great example:  I KNOW, RIGHT?).

While the top half of the puzzle coalesced rather quickly, the bottom half took much more work.  For my second set of seed entries, I chose to focus on the dynamic duo of APPLE LOGO over REALLY, NOW?—two more entries that, to my knowledge, are making their crossword debuts here.  I personally love them both—two phrases that are imbued with an outsize dose of meaning/symbolism.  I attempted dozens of fill options before David helped me settle on what you see here.

It is my hope that my constructor notes are entertaining for solvers and insightful for budding constructors.  I would say that, particularly with this puzzle, my fill preferences tend to skew a bit toward the avant-garde.  In practice, what this meant was that while I thought MSNBC HOST and APPLE LOGO were refreshing and vibrant, the initial venue to which I submitted it had doubts as to whether they were a bit too arbitrary/contrived (aka "green paint").  Allowing in APPLE LOGO could open the floodgates to a whole slew of other (and possible more arbitrary) answers:  Toyota logo, Target logo, BMW logo . . . all technically valid things, but where would you draw the line?  Totally understandable.  Re: the former, I feel somewhat vindicated by the obituary titles in numerous publications surrounding the death of Ed Schultz recently, though I see how an entry like this could be a matter of taste.  MSNBC HOST is not something you normally say in everyday conversation—it's more of a specialized descriptor. 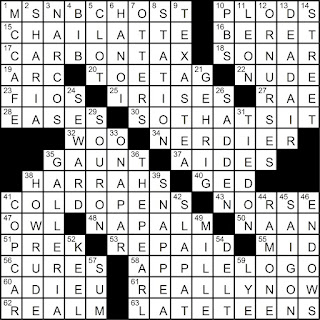