When I first proposed the idea to David, it was just a simple HA* HA* theme.  He proposed that we remove HA from the grid and use THE JOKER as a reveal.  And he gave me a list of the words from a quick program he wrote.  Just amazing!  Grid-wise, I initially put SARA in 53-Across—totally forgot my original word.  Thankfully I caught my goof [before] I sent out the grid to David. 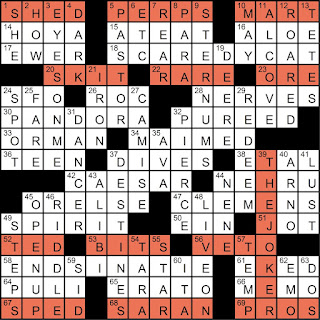 Zhouqin did an amazing job with this puzzle!  Incorporating 12 short theme entries may not look hard, but with two entries constraining every corner of the grid, I'd argue that it's one of the most challenging layouts.  As usual, though, Zhouqin made it look easy—she got THE JOKER to cross two theme entries, and she even worked in fun bonus fill such as SCAREDY CAT, EYES ON ME, and PANDORA.  The clues were also top-notch.  One of the only changes I made was adding another DC reference to the RIDDLE clue.  You may think you've conquered the puzzle after catching The Joker red-handed, but there's always a need for Batman!
Posted by David Steinberg at 12:01 AM