The inspiration for this puzzle was the persistence of the phrase "nothing burger" on cable news television over the last year or so.  If only they'd update the menu. . . .

The trick was coming up with other junky food modified by words or phrases that make the resulting meal "insubstantial."  Ultimately, BIG GULPS OF AIR was the key to being able to lay out the grid in a workable way.  And while it's the least "in the language" of the theme answers, it's also my favorite mental image. 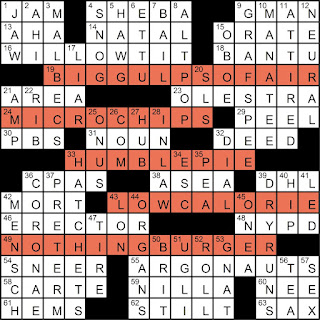 I like how each of this puzzle's theme entries is its own "aha" moment.  In other words, the theme entries are consistent yet so different structurally that you can't just fill them all in once you solve one.  The surprise NOTHING BURGER after the reveal is a nice touch, too.  Also, check out those wide-open upper right and lower left corners!  As a constructor, I would've instinctively added a pair of black squares at the 23-Across/9-Down and 46-Across/33-Down crossings—such open corners are usually impossible to fill, let alone fill smoothly.  But Ross nailed it, which shows serious grid-wrangling skills!
Posted by David Steinberg at 12:01 AM