This one had a strange beginning.  I started with celebs whose initials are forms of the verb to be—BARBARA EDEN, INGER STEVENS, ALYSSA MILANO (so BE, IS, AM).  For instance, the clue for Barbara Eden would be something like [Actress who got to ___ Jeanie (see initials)].  I also had [Activist actress who could claim, "I ___ the Boss" (see initials)].  It wasn't really working, so I morphed into this idea. 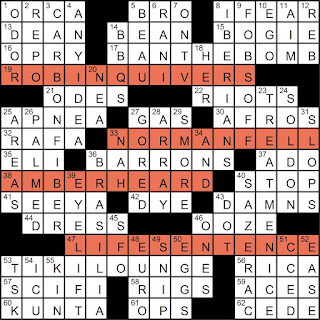 In Paul's original version of this theme, "Life Sentences" was the title.  Deciding whether something should be the title or the reveal is always tricky—in this case, I thought the life sentence wordplay was so clever that I didn't want it to be given away so quickly.  The downside of moving a clever title into the grid is that the new title usually pales in comparison.  "Name Changes" may not be as clever as the original, but I still like it, and I hope the aha moment produced by uncovering LIFE SENTENCE makes the trade-off worthwhile.

I'd also like to echo Paul's point about how themes often evolve numerous times from their initial conceptions.  I've started constructing many a "dead-end puzzle" over the years, only to scrap it and reuse part of the idea for something completely different.  The hard part is giving up on a theme you've already spent a long time brainstorming, so I admire how Paul quickly pivoted from one approach to another.
Posted by David Steinberg at 12:01 AM