"Free for All XIII," by Ryan McCarty

I started this puzzle with SEERSUCKER SUITS running right down the middle—it's still a fun and interesting entry despite all of the friendly letters, which is a relatively rare combination with 15-letter entries in my experience.  I don't own a seersucker suit, but I do have a pair seersucker pants I'll wear with a navy suit jacket to the office in the summer on occasion.

From there I worked on getting a solid triple stack in the middle, which took a bit of trial and error but eventually worked out.  After getting the middle solid, filling each of the four corners didn't take too long, as they were pretty isolated.  Even so, I have many half-finished puzzles on my computer where I've given up after attempting to fill some wider corners cleanly, so I may have gotten lucky here :-).  My favorite answers are probably FRAT BROS and POLI SCI MAJORS, but maybe that's because Princeton Reunions are around the corner. . . .

I also want to give a shout out to my sister Kristen who is graduating from West Point today!  I couldn't be more proud of her. 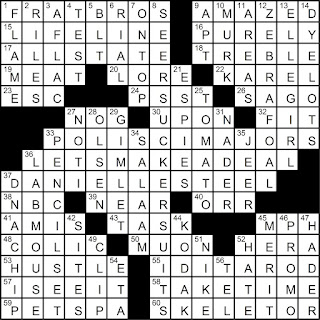 Getting a "stagger stack" as lively as POLI SCI MAJORS/LET'S MAKE A DEAL/DANIELLE STEEL to work with clean short fill is quite an achievement.  Having SEERSUCKER SUITS run through everything brings the puzzle from "wow" to "WOW"!  Elsewhere in the fill, I like how Ryan placed a focus on entries that are legitimate and interesting yet rarely show up in crosswords—for example, I don't recall having seen ZEBRA FOAL or DNA CHIP anywhere else.  And finally, I got a kick out of seeing FRAT BROS at 1-Across—even though I'm the furthest thing from one myself!
Posted by David Steinberg at 12:01 AM