The original idea that sparked this puzzle was "a day at the airport," where each common phrase began with an action you'd take when traveling by air:  Drive, Stand (TSA line), Run ("I'm never gonna make it!"), Sit ("Whew!"), Fly.  I never made that grid and really don’t remember why I changed the theme to what you see today, which became "The Evolution of Human Transport."  The only road bump along the way was at 31-Down, whose entry was originally IMBEDDED IN, a very rare variant of EMBEDDED IN; not being able to come up with an alternative, I thought about changing the theme entry to DRIVE UP THE VALUE, which sounded a bit off.  Back to the drawing board, and trial and error gave me IS WEDDED TO.  Not being too sure of that one either, I sent David the first version, and when he balked, the second.  He accepted it. 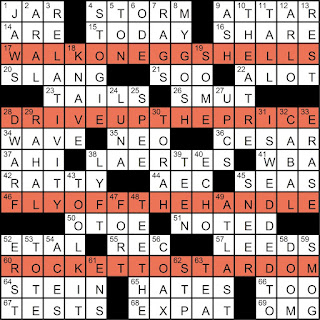 This puzzle is a perfect example of what I like for the early week!  The theme itself is simple, yet it's elevated by the progression from WALK to ROCKET.  Also, all four theme entries are lively and in-the-language—my favorite is ROCKET TO STARDOM, which I believe is making its crossword debut.  Working around 60 theme squares is always tough, though Jules rose to the challenge and even squeezed in a pair of long downs.  I was worried he'd have to scrap said long downs to get rid of IMBEDDED IN, though his IS WEDDED TO suggestion saved the day.  Your thoughts?
Posted by David Steinberg at 12:01 AM