This puzzle's journey started with the realization that LEMON could be "TWISTed" into MELON.  Fortuitously, while collecting other phrases with the same structure, I came across JUMBLE OF WORDS, which does double duty and also serves as a revealer.  Along the way, I considered using shorter anagrams but decided that keeping them at 5 letters or longer made for more interesting wordplay.

Using paired theme entries of lengths 12 and 13 forces the placement of the 10 black squares on the left and right edges of the grid and also limits the vertical options ([because there are] no theme entries in rows 3 or 13).  Nevertheless, I think the puzzle turned out pretty well. 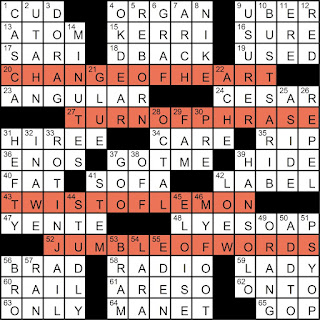 I'm a big fan of cryptic crosswords, which are known for their anagram clues, so this theme hits close to home for me.  Having JUMBLE OF WORDS as both a theme entry and the reveal sealed the deal.  That to me is more ingenious than fortuitous—Alex is much too modest!

He also brings up an interesting point about grid design in his last paragraph.  Because he used two 12-letter theme entries and two 13s, the highest he could place one of them was row 4.  Placing a theme entry in row 3—usually the highest position for a theme entry—would have required either words that are less than 3 letters long or big clumps of black squares.  Having the first theme entry in row 4 constrained the grid design more than usual, but I nonetheless feel that Alex maximized the long down slots he was able to use with ROT IN JAIL and BUSTS A RIB, both fun phrases that don't show up much in crosswords.
Posted by David Steinberg at 12:01 AM