I chanced upon this theme idea while making another puzzle—SET IN STONE and SPIKE STRIP both fit in a nontheme slot, and from there I just needed a good 10-letter BUMP phrase to pair with VOLLEYBALL, and the theme was ready to go.  I had a lot of fun playing with the grid without being very theme-constrained, though I got a little too ambitious at first.  David was very helpful in curbing those ambitions—he suggested adding in the black square under 9-Down, and that really allowed the grid to come together pretty cleanly (at least I think so!). 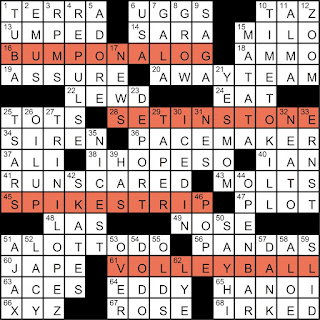 Today's theme is light and breezy.  Volleyball makes me think of the beach, which makes me think of summer . . . darn it, I still have one more month of school!  Anyway, Brian did a masterful job with this construction.  All the theme entries are lively and nicely change the meaning of their volleyball terms, plus the fill is loaded with zingy bonus entries—I especially like AWAY TEAM, I HOPE SO, RUN SCARED, A LOT TO DO, TIME TO KILL, YES MOM, and OPEN BAR.  I also have a funny story about TRINI LOPEZ:  As a millennial, I only know the name from crosswords, and it was only in the past year or so that I learned Trini Lopez was a man, not a woman.  Just one perk of learning most of what you know from crossword clues!
Posted by David Steinberg at 12:01 AM