"Up Top," by Jeffrey Wechsler

I assume that most crossword constructors have developed a sort of sixth sense (complete with mental antennae!) that suddenly converts random phrases and words into potential crossword themes.  It is not an inherited trait; it comes in response to environmental stimuli—the multitude of verbal or written words that appear around us constantly, and the pressing need to come up with another darned theme idea!  Every so often, a phrase strikes the brain as usable puzzle material.  I have no recollection of where or when I encountered or thought of the term "high five," but upon consideration, the implications of the phrase came to the fore (or five).  If I could think of two pairs of phrases starting with "five," which, when the "five" was removed, left entries of equal length, I could place them vertically, so that the "five" was "high."  Leaving out the "five" added some challenge (and hopefully some fun) to the puzzle.

Because this is my first puzzle to be published in David Steinberg's new editorial venue, I would like to take the opportunity to congratulate David on creating a new puzzle outlet that is already clearly among the best out there in crossword world. 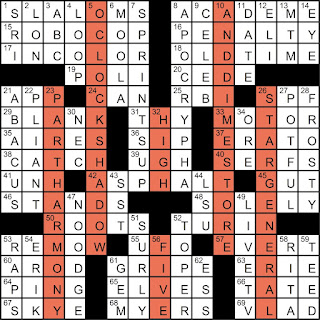 Jeffrey may be best known for his letter insertion themes, but he's also constantly pushing the envelope with ideas like this one.  All four theme entries here are excellent, and I also like how you can literally give the grid a high five to complete the theme entries (with 23- and 26-Down as the thumb and pinkie).  Two other miscellaneous observations:  (FIVE) O'CLOCK SHADOW is positioned at 5-Down, and (FIVE) AND DIME STORE is positioned at 10-Down, though perhaps that's coincidental.  The fill is also impressively smooth given the high theme density.  Jeffrey is one of the few constructors in the business who fills grids by hand, and he does it so well that he gives the software developers a run for their money!
Posted by David Steinberg at 12:01 AM