I recall that my initial idea for this theme was to use U.S. state capitals that were homophones for other words.  I remember having one idea along these lines—can't even remember which capital that was now.  But what I do remember was that with only 50 of them, there weren't enough to make a complete theme.  That's when I thought,  "Hey, there's a lot more world capitals than state capitals," and voilà—a theme was born!  My initial list of theme entries included BERN RUBBER and SEOUL MUSIC, both of which I thought were great, but David correctly pointed out that with five themers, things would probably work better if I abandoned 10-letter entries and went with all 9s in addition to the 13 in the center.  What helped even more was how it worked out that two of them could be Down entries crossing with that center 13.

Also, thanks to David for coming up with an appropriate title for the puzzle.  Coming up with good puzzle titles is a skill I'm still trying to master. 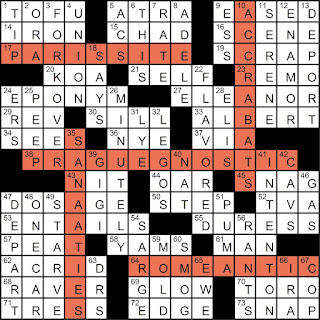 Puns.  Some solvers love them, others hate them with a passion. . . .  I personally love pun puzzles, but at the same time, I've set the bar very high for them.  After all, puns can end up feeling more stretchy than funny if a constructor takes too many liberties.  This puzzle impressed me in so many ways!  All the puns are spot-on, the capitals are always at the beginnings of their theme entries, and Mike even got three of them to interlock (!).  Of the theme entries, my favorite is PRAGUE GNOSTIC, since it's both the longest and the one that surprised me most.
Posted by David Steinberg at 12:01 AM