"Half Off," by Mark McClain

English is so colorful, brimming with idiomatic terms that often "puzzle" people who are trying to learn it as a second language.  Of course, other languages have their own idiomatic terms—for example, in Spanish "encontrar tu media naranja" means literally "to find your half of an orange."  But what it really means is to find your true love or, as we might say in English, your better "half."

So, today we explore English phrases that include the word "half."  We crossword-making folk are not allowed to use the same word over and over in a puzzle grid, but we can in the clues!  But, to make it a little tougher, let's leave the key word out altogether.  So, all the HALF phrases in the clues are missing the word HALF.  Thankfully, we have a title that helps you figure all that out.

And finally, you perfectionists out there might have picked up on the fact that only four of the five phrases are idiomatic.  A FIFTY-CENT PIECE is literally half of a dollar—but then I'm sure many solvers are scratching their heads wondering what a fifty-cent is!  Ask your grandma. 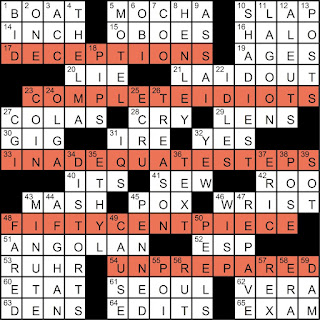 Mark put a clever twist on the classic definition theme.  I also appreciate the extra care he took to make sure the theme entries were in-the-language.  Interestingly, when I was growing up, I always called half-dollars FIFTY-CENT PIECEs.  Maybe that's just me, though—I'd be interested to hear more perspectives in the comments.  In any case, working around five theme entries—especially when two are 14 letters long—is always a challenge.  Mark kept the fill extra-smooth, though, in part by sectioning off the different corners.  In theme-dense puzzles like this one, that can be a smart strategy, since working in long downs often forces many compromises.
Posted by David Steinberg at 12:01 AM