This puzzle was inspired by my students, many of whom are at driving permit/license age.  They told me that holding your hands at ten/two on the wheel while driving is actually no longer recommended (!) because of injuries to hands and fingers that occur when newer airbags go off.  (Instead, the newly recommended way is to hold the steering wheel slightly lower than nine/three.)  Even so, I figured that the concept of ten/two still held water, and I thought a puzzle like this might even increase awareness of the new driving recommendations.

When coming up with phrases made of a ten-letter word and a two-letter word, I was pleased at how few there were that were also cleanly in-the-language—I tend to prefer theme sets that don't have many other options that could have been used in the grid instead.  If I can get away with it, I also like to hide Easter eggs in my grids, so the fact that I could construct a diagonally symmetrical grid with TEN and TWO in their correct clock locations was too good to pass up.  It's not the normal place for a revealer (and, some might argue, too early in the grid for the revealer), but I figured this theme certainly merited the exception.  Thanks for solving—and keep those hands and fingers safe! 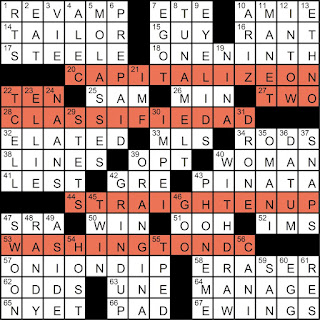 This is one of the first puzzles I've seen where the theme is based on word lengths rather than words themselves—such a neat twist!  My favorite part has to be the TEN/TWO Easter egg, though.  When Nate initially pitched the puzzle to me, I spent a good five minutes wondering why the "reveal entries" weren't placed at the bottom of the puzzle, especially since letter patterns like TC??? are so tough to fill around.  I had a great aha moment when I realized what was going on, and I hope you did, too.

Nate also recently put together a Queer Qrosswords pack, which I highly recommend looking into if you haven't already.  The puzzles, constructors, and editor are all excellent—I can't think of a better way to celebrate Pride Month!
Posted by David Steinberg at 12:01 AM