After coming up with the puzzle's theme, I brainstormed a list of bands with one-word names.  Next, I looked for multiword phrases that started with those names.  Some of them (like OASIS) didn't pan out, while others (like KANSAS) were kind of boring (since KANSAS CITY and KANSAS STATE aren't particularly scintillating).

After compiling the list of phrases, I grouped them by length.  I wanted at least one themer of 9 letters to go with HEADBANDS.  Beyond that, I was looking for pairs between 8 and 11 letters long, as those lengths allow for flexible grid design. 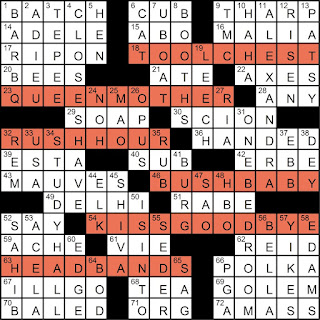 Alex chose such a lively set of theme entries that start with bands—my favorites are QUEEN MOTHER and KISS GOODBYE!  Disguising the musical meaning of bands in the reveal, HEADBANDS, is an elegant touch to round out the theme.  I was also very impressed with Alex's gridwork here.  I don't expect to see lively long downs in grids with six theme entries, but he stuck in not one but two (!) pairs.  And finally, here's a picture of a BUSH BABY, because it's just too cute not to include in this post: