My background:  I spent my career as a systems developer, and my original interest in crosswords was in figuring out how to persuade a computer to fill in grids.  I then created puzzles for the shrinking world of Canadian community newspapers for about a dozen years and then took a break.  Recently I decided it was time to take a serious run at the American market.

As a puzzle creator (and solver), I have always preferred themeless puzzles.  The wide-open grids can provide more elbow room for longer entries, and those entries are not restricted by a theme.  Although everyone needs a little glue sometimes in order to hold together a grid, I also find that with a themeless puzzle, I am often able to avoid grid entries from my "tiresome 200" list.  You know the ones:  ADIT, AREA, ARENA, EKE, ELS, ONO, and so on.  That is probably more important to me than it should be.

Thanks to David for helping to get rid of the glue that I did have left in the grid.  A set of expert eyes on the job can really improve things. 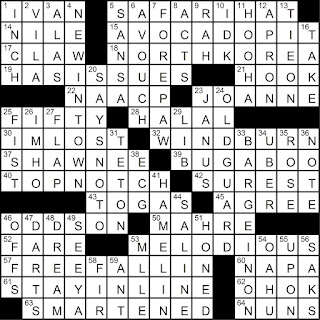 Brian's byline may be new in the United States, but he's already producing some of the smoothest themelesses in the country.  I never would have thought to put entries like AREA and ARENA on a list of stale fill since they're also common words, but I respect Brian's decision to do so.  In the case of AREA, for example, I'd argue that nearly every possible clever clue has been used multiple times—in fact, a quick check of the Ginsberg clue database shows that some constructors have gotten so bored of conventional AREA clues that they've resorted to ["Diamonds ___ Girl's Best Friend"]!  I'll still always allow entries like AREA and ARENA, though I've recently been trying to crack down on less well-known crosswordese like ADIT.  I'm a strong believer that crosswords should be a reflection of daily life and culture, so having a word that I've never seen outside of crossword grids show up so frequently feels weird.
Posted by David Steinberg at 12:01 AM