"What a Card!" by Alison Ohringer

This card theme idea started brewing when I realized that a few types of cards had fun anagrams.  But unlike words whose anagrams have the same meaning (I think there's a word for that . . . ), like astronomer/moon starer, there was no theme to the cards' anagrams.  David had the idea to use the cards as a straightforward, early-week theme, and I'm happy with the result.  Also, props to people who create greeting cards, because coming up with those theme clues was pretty tricky.

I'm new to constructing, and I'm grateful for things David has done intentionally to limit the barriers to entry for newcomers.  He responds to theme inquiries and revisions quickly, provides constructive feedback, and—probably most exciting—pushes up publication dates for first-timers, allowing us to get our foot in the door.  Since major publication venues only have, on average, one female constructor per week, these kinds of things go a long way. 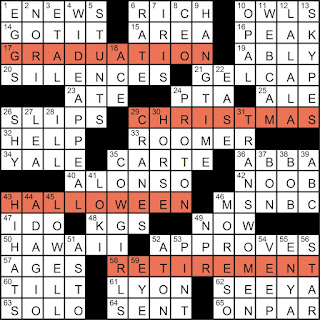 It was a pleasure working with Alison.  When I suggested that she change her original anagram idea to this "What a Card!" gimmick, she was on it.  She not only came up with four strong theme entries but also brainstormed an awesome set of gags to go with them.  It's rare that a crossword clue makes me laugh out loud!  In the fill, Alison made sure to sprinkle in plenty of liveliness.  My favorite entries are WIDE APPEAL, COWGIRLS, and TRANS WOMEN (which is especially fortuitous, given that the puzzle is running during Pride Month).  All in all, Alison's crossword talent has already placed her far above NOOB status, and I look forward to watching her continue to develop as a constructor.
Posted by David Steinberg at 12:01 AM