"Where To?" by Jamey Smith

As someone still in his relatively early days of constructing, I'm excited to make my Puzzle Society debut and to be here among such august company.

This puzzle grew, so to speak, from SQUASH COURT, which struck me as just a funny mash-up and got me thinking of other everyday terms with alternate-meaning possibilities.  That led to some on-again, off-again brainstorming to fill out the theme.  After losing more than one promising option to the ether when I didn't jot it down immediately and rejecting several others as subpar, I eventually had what I considered the solid set you see here.

Many thanks to David for green-lighting this one.  Here's hoping it's not my last to make the Society pages! 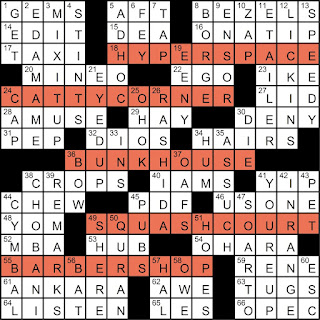 Another newish constructor today!  This is Jamey's second published crossword—his first appeared in The Wall Street Journal—and I have a feeling there will be many more to come.  I got a chuckle out of all the locations he found, especially SQUASH COURT and HYPERSPACE.  I also have an interesting tidbit about MIX IT UP.  In the past, it's always been clued along the lines of [Have a brawl] or [Engage in a quarrel].  I've actually never heard this expression outside of crosswords, though, and neither had our test solvers.  So I decided to mix it up with the clue [Break from a routine].  Which sense of mix it up is more familiar to you?
Posted by David Steinberg at 12:01 AM