When I started dabbling in construction several years ago, I found developing original theme ideas very difficult.  What I had was a slew of then–New York Times debut entries scribbled on scraps of paper, including MARGIN OF ERROR.  Then, one night, it struck me:  What if the puzzle had entries that extended beyond the grid, into the margin . . . literally, some margin of error?  And what better a stand-in for ERROR than . . . —OOPS!  "This is fantastic," I thought.  "Just think, these entries are marching along, minding their own business, then suddenly they come up against the end of the grid and then . . . —OOPS!  It works on so many levels!"  Full disclosure:  I was not entirely sober at the moment of this epiphany.

The New York Times didn’t find my initial (2013) submission compelling, which was fortunate, since that enabled me to revisit and enhance the idea with the benefit of additional experience.

This theme would be super uncool if all the answers were just arbitrary -OOP plurals.  David initially thought I SUPPORT THE TROOPS was a bit too contrived, and I'm glad he came around. JUMPING THROUGH HOOPS would have made the perfect grid-spanning central entry for this grid, but working around that forced excessive grid compromises.  Another possibility I loved:  EVERYONE POOPS!  Unfortunately, that might just be a little too scandalous for the general solving public.

I hope you didn't get too startled by my sneaky little theme entry in the top row.  If so, MY MISTAKE!  I'd tried to include that as the grid's final entry (at 68-Across)—a cruciverbal exclamation point, if you will.  Again, it wasn't worth the compromises in the resulting fill.

I was pleased with several of the long down entries, including AERIAL MAPS, which I utilize all the time in travel planning.  You can see some of the results of my travels at Postlandia, stories and photos from the (presently 9,100) post offices I've visited across the country.  It's fun, I swear!

Oh yes, and thanks to David for reviving this otherwise dormant idea! 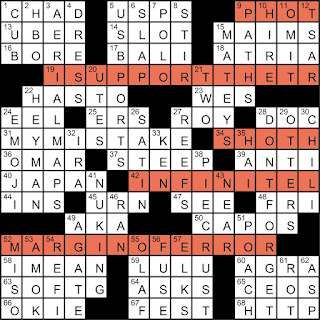 I've seen a handful of outside-the-box themes over the years, though never one that works quite like this.  I had fun imagining the "margin of error" to the right of the grid!  Evan also knocked the fill out of the park—in addition to keeping things extra-smooth, even in areas constrained by multiple theme entries, he worked in fun bonuses, such as DON'T FORGET, PIE CRUST, USB PORTS, HEY MAN, MY MISTAKE, and, as he mentioned, AERIAL MAPS.  I also laughed when I saw Evan was considering using EVERYONE P(OOPS).  I still own a great children's book with that title—saving it for my future kids' potty-training days!
Posted by David Steinberg at 12:01 AM