This idea emerged from a cluing trick that often trips me up as a solver:  when part of the clue seems to refer to something else but in fact means, literally, itself.  After years (okay, decades) of solving, I'm usually on my guard for clues like [Nice man] for HOMME—that's a clue where the misdirection lies in a solver heading out in the wrong interpretive direction for Nice.  But I always seem to fall for clues in which the right direction amounts to "Don't move!"—like, say, [Sport shoe for hoopsters, for example] for ANAGRAM.  Applying that literalness to "..." had the bonus of playing with the crossword convention of using an ellipsis to indicate that the clue is a continuation of another clue, and I liked the chance to offer a sort of subtle progression in theme answers, in which the first ellipsis signifies truly absent words, the second signifies absent words that carry artistic meaning (like in a Pinter play), and the third signifies words that will be visible soon (hopefully).  I just wish I'd also thought of the clever title that David gave it!  My thanks to David for all of his editorial improvements, and I hope solvers enjoy this tribute to the presence of absence. 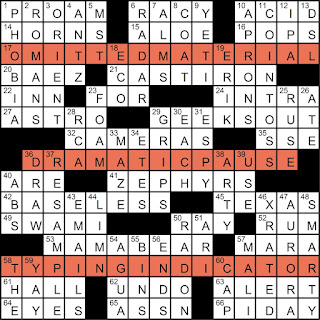 Matt's puzzle is on the quirky side for a Monday, which is just the way I like it!  I feel an easy puzzle doesn't need to have a tried-and-true theme type.  In fact, I've come to believe that slightly more complicated Monday themes cater to the widest audience.  When I started solving, I didn't pay much attention to the complexity of the theme—as long as I understood what was going on and wasn't bogged down by challenging fill and clues, I was satisfied.  Now that I'm a more experienced solver, early-week puzzles don't pose much of a challenge, so my enjoyment largely depends on how fresh and clever the theme feels.  I'd be interested to hear more perspectives on this, though—what are your thoughts?
Posted by David Steinberg at 12:01 AM