"Furnish the Answers," by Paul Coulter 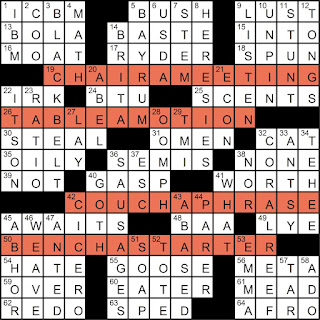 Paul found four fresh furniture phrases to build a puzzle around.  I like how each phrase is of the form "singular piece of furniture + a + last word"—this touch makes the theme feel consistent and smooth.  In the fill, Paul and I went back and forth a few times to make make sure the vocabulary was easy enough for a Monday.  Notice how Paul used a pair of "cheater squares" before BUSH/after SPED to make the fill easier.  That was a smart choice, since the upper and lower center areas are not only wide open (approximately 5x4) but also have several entries that cross multiple theme phrases.  There are many more possibilities for a down entry that crosses one theme phrase (like ???A) than for one that crosses two (like ???R?M).  By using cheater squares, Paul made sure he wouldn't be forced to use clunky entries in those areas.
Posted by David Steinberg at 12:01 AM