"Few and Far Between," by John Guzzetta and Michael Hawkins

Michael Hawkins:  John and I often text themes to each other, and in this case, it turned out we were working on similar ideas.  Once we combined our lists, we had a good set of theme entries.  Over the next few days, we shot grids back and forth until we were satisfied with the rest of the fill.

John ceded write-up responsibility to me because he's off hiking where reliable internet access isn't to be found.  This is our fifth published collaboration and we're certain to have many more, presuming he returns to civilization. 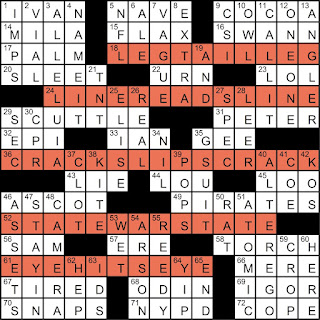 I always appreciate a good rebus-style theme.  No, I'm not talking about crosswords where multiple letters appear in single squares (although I'm also a big fan of those)—I'm referring to the classic picture puzzles:

In this case, John and Michael chose one form of rebus to build their theme around.  The consistency is elegant, and I'm amazed they were able to find so many great "___ between the ___" phrases!

The requirement that theme entries be arranged symmetrically has tormented every constructor at some point.  In an ideal world, John and Michael would have had all singular theme phrases (as in hit between the eyes rather than HITS BETWEEN THE EYES).  Since symmetry makes using just singulars impossible, though, they did exactly the right thing:  mixing singulars and plurals in a relatively even ratio (two singulars and three plurals).  If all but one of the theme entries were singular, the one plural would stick out as inelegant, and vice versa.  Just one of many excellent calls John and Michael made here.
Posted by David Steinberg at 12:01 AM