The originally submitted version of this puzzle included two more theme entries:  LONG JOHNS and DIRTY JOBS, which were placed at 27/28-Across and 43/44-Across, respectively.  Unfortunately, there aren't many famous people named JOB, so those entries had to go.  Even without those two, however, there are still five themers, which I think is plenty for a CREW. 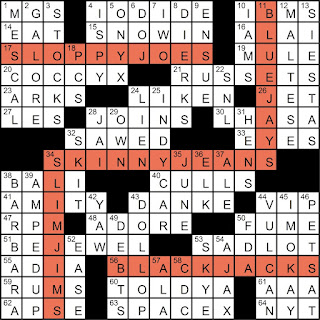 Using five theme entries is plenty impressive.  Getting three of them to interlock makes the puzzle a wow in my book—Alex is truly a grid wizard!  In the fill, he included plenty of midlength fill to spice things up.  My favorite bonus entries are COCCYX, INDY CAR, MALTESE, BEJEWEL, and SPACEX.  That's a lot of fun stuff, especially for a puzzle that's already so theme dense.  The short fill is also smooth and Tuesday-easy all around.  And finally, if you're wondering who came up with the brilliant title "J.Crew," that was all Alex.
Posted by David Steinberg at 12:01 AM