I suppose most every constructor ends up making a vowel progression puzzle, so here's mine.  I really lucked out with the symmetry and snazziness of the entries—BEZELLESS is merely functional, but it needs to be there.  David also suggested trying BEZELLESS PHONES and BUZZFEED QUIZZES, but that was too much for the grid to handle—it's already at 80 words, 2 above the max. 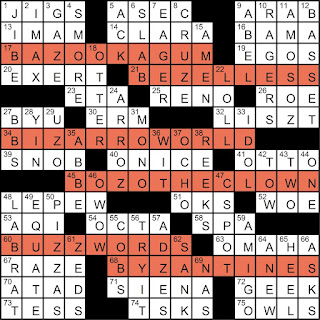 Such an ambitious vowel progression theme!  Brian both used the rare letter Z and included a BYZ example, making a total of six long theme entries rather than the usual five (with just A, E, I, O, and U).  He was smart to stack two pairs of theme entries in the top and bottom—that way, only two pairs of entries (OTTER and LOLL/OW OW and C SPOT) were constrained by both the middle and the top/bottom areas.  Finally, Brian's original submission had 78 words, but I encouraged him to go up to 80 so he could make the fill more Monday-friendly.  In my opinion, when push comes to shove, smooth fill is more important than sticking to the word count limit.
Posted by David Steinberg at 12:01 AM