"Break a Legume," by Greg Poulos

One fun/weird thing about this puzzle is that 1-Across also happens to be a theme entry.  That's not usually the case, due to the relatively demanding conventions of crossword construction.  I hope it makes for a slightly off-kilter solving experience—appropriate for this slightly off-kilter theme.

Fun fact:  In a previous version of the puzzle, PINE TREE was the entry at 68-Across.  After a bit of revision, it somehow migrated to 43-Across.  The hardy conifer survives again!

Finally, many thanks to David for helping to improve this puzzle substantially from its original incarnation. 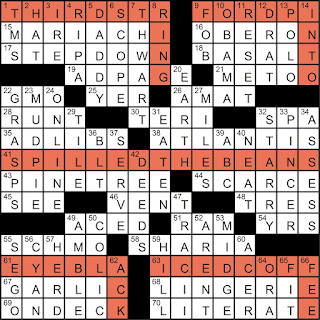 This puzzle's theme has so many levels.  First, Greg found four theme entries that end with kinds of beans, taking care to change the meaning of the "bean words" where possible.  Then, he had each bean word turn 90 degrees.  Finally—my favorite part—he made sure that the down entries formed by the beans (RING, INTO, ACK, and FEE) were legitimate.  Greg also knocked the fill and clues out of the park!  His parallel [One in a Latin trio, perhaps?] and [One in a Latin trio] clues for MARIACHI and AMAT felt especially elegant.
Posted by David Steinberg at 12:01 AM