This puzzle is based on what might be called a "shared letters" theme.  The four long entries are familiar three-word phrases in which the last letter of the first two words is the same as the first letter of the following word, and these letters are "shared" in the grid.  This may create some consternation on the part of solvers who might think there is an error in the grid . . . until they figure out the gimmick, which hopefully doesn't take too long.  Once you've finished the grid, you may notice that if you read the phrases, they seem perfectly normal.  Or not. 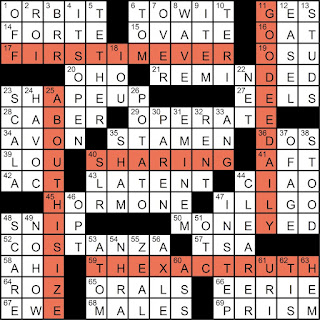 They say sharing is caring, though Mark found an ingenious way to turn sharing into a fiendish Friday theme!  Finding four in-the-language three-word phrases with double letters at each word break can't have been easy to do.  And just overall, I love the quirkiness and originality of the theme.  In the fill, you'll notice that there are no long nonthematic downs.  I think that was a good choice on Mark's part, since having long nonthematic downs mixed in with the long down theme entries might have been confusing.  Focusing more on midlength slots also allowed Mark to keep the fill extra-smooth.
Posted by David Steinberg at 12:01 AM