"Free for All XXII," by Erik Agard

Started with the top left stack and built out from there.  Didn't mean to end up with quite so much sports.

Also, the ROT-13 code name for this puzzle was "JUNGFTBBQ themeless," which sounds delicious. 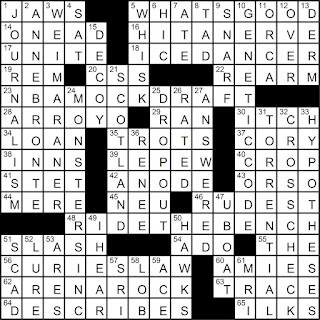 Two triple stacks of 9s paired with two triple stacks of 10s would've been impressive in its own right.  Erik took this grid to the next level, though, by having a pair of 11s and a pair of 12s weave through all those stacks.  Wow!  The grid may be heavy on sports, but even this non-sports fan enjoyed seeing NBA MOCK DRAFT and RIDE THE BENCH in the puzzle.  Erik is also the king of question mark clues—misdirection doesn't get much better than [Yellow pages, perhaps?] for JOURNALISM, [Have a permanent seat near Coach?] for RIDE THE BENCH, and [Rules of life?] for GENETIC CODE.
Posted by David Steinberg at 12:01 AM