I really didn't think this theme was going to work, so I stopped looking at it for a while and then the last theme answer just popped into my head during dinner one night, completely unbidden.  (Then I tried eating more food and not looking at the grid and the clues, but nothing happened, so I had to actually work on those.) 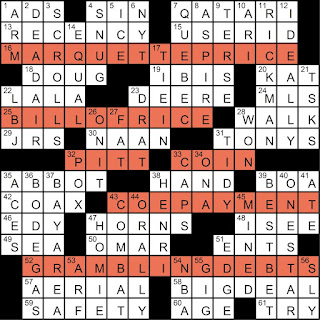 I really admire how specific this theme is.  As constructors know, the more constraints you add to your theme, the smaller your pool of options becomes.  If Erik had done just college puns, for example, he would have had a much easier time finding theme entries.  The theme would've been a lot less elegant, though, so I like how Erik went big with his theme idea.  The grid is also smooth and lively all around, in part because Erik was careful not to use too many three-letter entries (which often feel tired and overused).  He could have easily added an extra pair or two of black squares in the upper left and lower right to make the fill easier.  By leaving them out, though, he was able to incorporate great bonuses like BIG DEAL, BEST BET, ONE-STAR, and DEAD AIR while at the same time reducing the number of threes.
Posted by David Steinberg at 12:01 AM