"In Other Words," by Tom McCoy

A few years ago, I did a summer job supervised by a computational linguist named Lori Levin.  At one point she mentioned the word unionized as a fun example of ambiguity, and since then I've been keeping track of other words that could be parsed in multiple different ways.  For this puzzle I stuck only with words for which the number of syllables changes, since I enjoy how dramatic such changes can be.  Thanks for the inspiration, Lori! 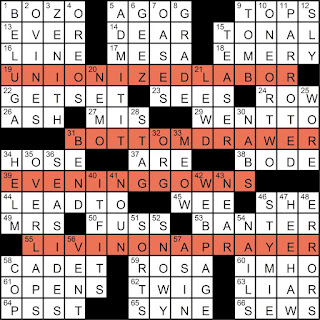 I've been a huge Tom McCoy fan ever since he started publishing in The New York Times, so I'm honored to run one of his crosswords in The Puzzle Society!  His themes always have a quirky, linguistics-y twist, and this one is no exception.  Of the four theme entries, I especially got a chuckle out of UNIONIZED LABOR and BOTTOM DRAWER.  I'd also like to highlight Tom's clues, which are consistently fresh and clever.  Three of my favorites are [Mindlessly repeated. Mindlessly repeated.] for PARROTED, [Shore things?] for SEASIDES, and [Possible entry point in heist films] for VENT.  I'll close with a clue I found fascinating but ultimately changed because our test solvers were confused:  [Turns BINGES into BEGINS, say] for SORTS.  Do you see how this clue works?  I'd love to hear your thoughts in the comments!
Posted by David Steinberg at 12:01 AM