This puzzle was a long time in the making . . . it was tough to find famous streets that people would recognize and get them to be in symmetry . . . and using Street only, not Drive.

I had always planned to add an extra layer with the clues—the LOMBARD/San Francisco connection sealed the deal. 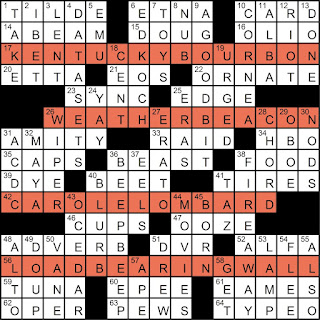 I love how Greg elevated this theme in the clues!  Coming up with a way to tie each famous street's city into its clue can't have been easy.  Greg and I exchanged numerous emails about KENTUCKY BOURBON—I was worried it wouldn't be possible to tie that clue into New Orleans, but Greg rose to the challenge and came up with such a clever way to make the connection work.  Greg also wrote a great set of clues.  Two of my favorites are [THIS CLUE HAS NINETEEN] for CAPS and [Goddess whose tears became the morning dew] for EOS.  The latter is a lot more interesting than the usual [Dawn goddess] clue.
Posted by David Steinberg at 12:01 AM